Companies Are Not Responsible for Repaying Employee Debt 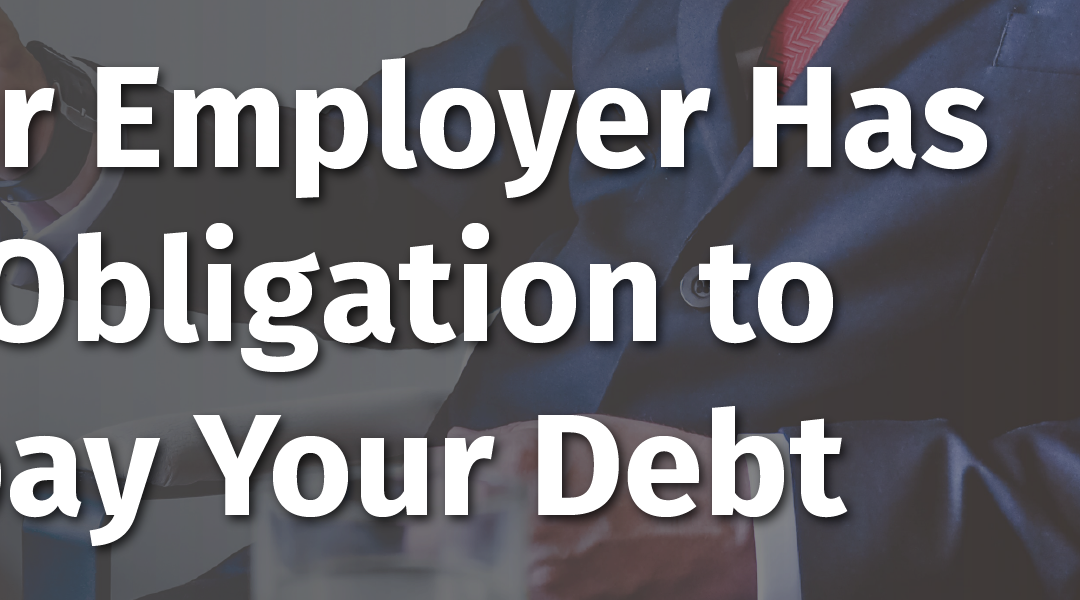 There is More Consumer Debt Than Ever Before

According to data from the Federal Reserve, non-mortgage related debt (credit card, auto loans, student loans, etc.) is growing at a rate of more than 7% annually to nearly $4 trillion. Americans are spending 10 percent of their individual monthly income on this type of debt, which makes up 26 percent of their income overall.

Typically, consumer debt doesn’t concern employers. Many companies depend on people using credit to purchase their products. However, with the increasing rates of consumer debt, some business owners are worried about their employees’ financial wellbeing.

Employers Should Be Concerned About Their Employees’ Debt

There are two causes for concern to employers regarding debt. The first concern is the declining rate of financial literacy among  American adults. According to a Gallup Poll, Americans performed poorly on questions about investments, bonds, and financial markets. This lack of financial literacy is contributing to the degradation of people’s debt-to-income ratio. A financially literate person can use their income, however small, to its fullest potential. A financially illiterate person can take that same income and dig themselves into a hole.

The second cause for concern is an increase in debt amounts. Student debt, in particular, is rising at an unprecedented rate. Student debt broke the $1.5 trillion mark in 2018 and shows no sign of slowing down. The increase in college tuition has caused more people to carry five- and even six-figure student loan balances. Student debt is necessary for many types of employees to find high paying work.

Employers Don’t Have an Obligation to Repay That Debt

Student loan repayment assistance, such as a contribution program, is an excellent way to recruit and retain educated employees. However, those employers are choosing to offer that benefit to gain a competitive edge in the war for quality talent. Employers are not responsible for their employees’ debt. Because employers are not obligated to repay student debt, that type of benefit makes the employer all the more attractive to work for.

A 2017 study by PricewaterhouseCoopers found that approximately half of employees miss work occasionally because they’re worried about their financial health.

An IonTuition study found that 2 out of 5 employees earning over $50,000 reported worrying about personal finances for 10 to 12 hours per week while on the job.

Student loan assistance, such as IonTuition, offers guidance into repaying student debt by laying out various repayment paths and providing expert counseling so employees choose the best options. This financial wellness tool, even without a contribution program, can help your employees feel better about their financial situation and be able to focus more on their work.