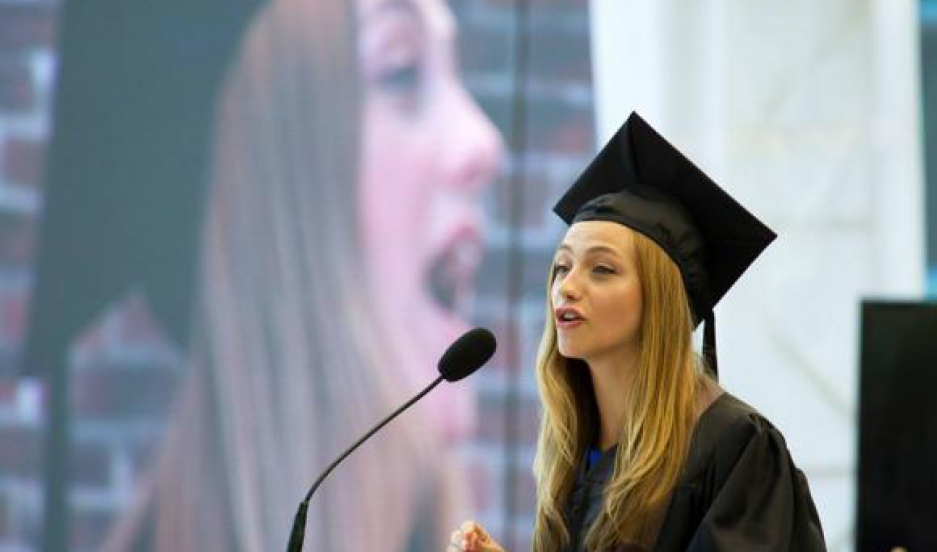 Michelle Bailhe was one of two graduating seniors chosen to speak at Brown University’s 247th commencement. Bailhe delivered her address, “I Don’t Know,” in Providence, Rhode Island, on May 24.

Editor’s Note: What do you do when an eminent scholar says, “I don’t know?” For this graduating college senior and her classmates, the simple acknowledgment of new problems to solve got minds whirring. Below are excerpts of a commencement address on this theme.

Our first week at Brown, 500 of us packed Salomon lecture hall for Introduction to Neuroscience. As the professors concluded their opening lecture, a student asked what seemed like a simple question: “Is it true we only use 10 percent of our brains?” Without hesitation, Professor [Michael] Paradiso answered, “I don’t know.” Our professor, renowned neuroscientist, didn’t know. He said, “New research suggests we don’t really know what percent of our brains we use for neural processes like thinking. The field doesn’t know yet so I don’t know.”

The room went quiet. Students sat up straighter. Ears perked up. The only sound was of the mental gears in 500 Brown student minds — churning. I heard whispers of: “How could you measure that on a cellular level? Could you stain brain tissue or create a computer program?” Our collective curiosity galvanized us. Unimpressed by knowledge alone, by facts already discovered, we were ignited by what we didn’t know.

For the next four years, seeking out these “I don’t know” moments became our daily challenge, our intellectual regimen. … We probe visiting dignitaries, testing resolutions to global conflicts as if they could be solved Right There in the lecture hall. We cherish controversies yet unsettled, problems yet unresolved, doctrines long unchallenged. We don’t just embrace the unknown, we ask it out to fair-trade coffee with its enthusiastic consent. If author John Fowles is right that an answer is a form of death, saying “I don’t know” breathes life into our restless minds….

In our Information Age, we’re rewarded for absorbing knowledge, for being excellent sponges. We’re conditioned to fear moments when we don’t know, moments of vulnerability. Last summer, I worked for a nonprofit law firm. One client was facing deportation back to Ghana but required thrice weekly dialysis for kidney failure. Dialysis in Ghana is scarce and expensive, but we needed proof that deporting her was tantamount to a death sentence. I suggested a Ghanaian doctor’s testimony to the lack of access. “Great,” said my boss, “how can we get that?” “I don’t know, but I will find out.”

I started by contacting Brown professors who had done field work in Ghana. They directed me to the largest hospital. And then a friend in the Class of 2015, Yao Lui, was visiting Ghana with a Brown-founded medical nonprofit. He directed me to another member of our class, Nia Campinha-Bacote, who was conducting research at that main hospital. She then tracked down the chief dialysis physician, got her testimony and sent it back to us — across the Atlantic — for our client’s case. I was in awe of the power of the Brown community operating not just beyond these gates, but half-way around the world. “I don’t know” wasn’t a dead end in the conversation. It was a beginning.

But “I don’t know” is not only the first step on the path to discovery. It’s also a critical step on the path to human connection. Researchers have demonstrated the power of unconscious bias. When we meet someone new, we’re conditioned to think we already know them. To borrow Nietzsche’s term, there is no “immaculate perception.” Socially-constructed stereotypes seep into our subconscious. They sow assumptions about our fellow citizens, our fellow human beings. Preconceptions and misconceptions about race, class, gender, language, religion, sexuality, nationality and ability profoundly shape our world. They structure our institutions and delimit our possibilities. Their reverberations are felt from France to Ferguson, from Birmingham to Baghdad, from Baltimore to Brown.

Bias is dangerous precisely because it is false knowledge. Because the truth is we don’t know. We cannot know how someone thinks from a weak data set of appearances and social constructions. We as Humans are too Complex, too Dynamic, too Surprising, and too Magnificent. To know what someone thinks, we have to ask them what they think. …

Anthropologist and author Zora Neale Hurston wrote “there are years that ask questions, and there are years that answer them.” … She’s right. This is a year that asks questions…. And some of our questions are deeply reflective: Am I enough? Am I brave enough to confront my own biases? Am I driven enough to persevere in solving the issues I care about?

These questions push us into uncomfortable places. To many of them, our answer may be — today and often — “I don’t know.” … Every day, we’ve challenged each other to take no observation, no dominant narrative, no established truth at face value. Every day, we’ve challenged each other to hold self-evident only that nothing is self-evident. … Brown has taught us that in this community, within these gates and far beyond, “I don’t know” merely means “I don’t know yet.”