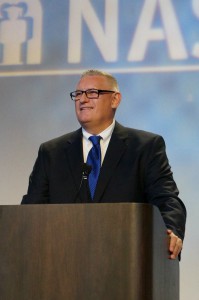 The National Association of Student Financial Aid Administrators held its annual conference at the Hyatt Regency in New Orleans, bringing together hundreds of financial aid professions from across the country.

The four-day conference kicked off on Monday, July 20, with a keynote speech from Hill Harper, an author, philanthropist, and actor best known for his role on CSI: New York. Harper spoke about harnessing passion and using reason and courage to achieve goals. “There will be all sorts of naysayers who will project fear onto you when you are trying to do something different or impact a change, but who’s to say that’s true?” Harper said.

“When you think about what ideas you’re going to talk about [at this week’s conference]… ask yourself if they are bold and innovative, and if you have the energy required” to see them through.

The first day also had a session on the NASFAA Management Benchmarking Task Force, discussion benchmarks that could be helpful for financial aid administrators. The task force had surveyed senior administrators and is using the results for a new survey that will be used to update the organizations Staffing and Salary Models. Other sessions included a town hall with Department of Education representatives, discussions on regulatory and compliance challenges, diversity in the financial aid office, and communicating value versus price.

A panel of judges including NASFAA National Chair Eileen O’Leary, Sarah Bauder of the Bill & Melinda Gates Foundation, and Jacob P. K. Gross of University of Louisville, judged three contestants to determine which one had the policy idea with the greatest potential. The winner — Mark Szymanoski, for his Student Aid Modernization Initiative (SAMI) —was announced on Tuesday, and will have the opportunity to develop his idea and have it published in a white paper.

The conference ended with a call to action from Dan Mann, the new NASFAA National Chair and director of student financial aid at the University of Illinois at Urbana-Champaign. “I have an overarching goal that the association will be even stronger when I pass the gavel to [National Chair-Elect] Lisa Blazer next year in Washington, D.C.,” Mann told attendees. “As we move forward, we must continue to think big, considering both the immediate and future needs of our financial aid programs.”

Mann said the association will face issues such college cost and funding for higher education. He said NASFAA’s main goal is to look for ways to strengthen the financial aid profession, as both financial aid offices and policy positions are being scrutinized more closely.

For in-depth details on all four days of the conference, see NASFAA’s own day-to-day coverage.