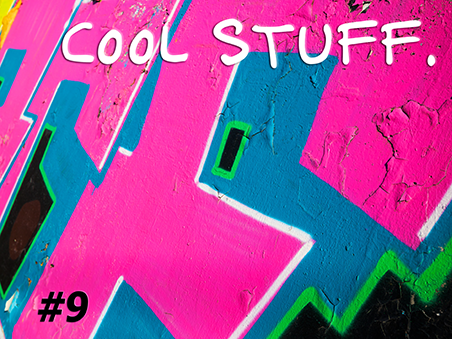 Part One: What you really want to know about Henry Ford 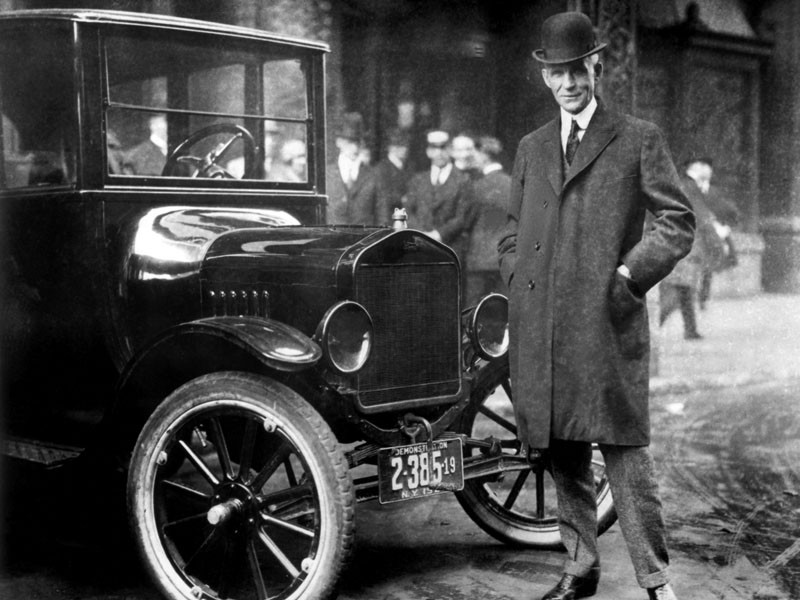 I’m sure many of you (including myself) didn’t know this, but today is Henry Ford’s birthday. I want you to take a minute to think about what our lives would be like without cars; yes, cars to drive to work, cars to drive to the hospital, cars to deliver any number of goods and services. Obviously, it would be much different, and in many ways much harder. While reading this post, I want all of you to consider that today, 100+ years later, our lives remain changed by one man’s vision.

It all starts with an ordinary individual who has a dream. Henry Ford was an ordinary man who grew up on a farm in Michigan. At a young age, Ford began demonstrating the characteristics that would later lead to his success.

Most of us would associate Henry Ford solely with creation of the automobile, but that is where we are wrong. Henry Ford did not create the automobile; he took an invention that was unknown to most and made it into an innovation that is now ubiquitous.

That is why I decided to talk about Henry Ford in this week’s post. The ideas of one ordinary man changed the way we go about our everyday life. His story shows us that the power of one person’s curiosity and hard work can transform into something so much more.

After leaving the farm at only 16, Ford began to pursue his ideas by working at a machinery shop in Detroit. He was willing to learn and take risks to make his vision of the future happen. Working many different jobs in the car manufacturing industry, Ford would leave certain companies if he felt another offered more to learn. It didn’t come easy and he even failed multiple times (Ford was fired from his first job)!

He allowed his free time to be consumed with challenging his assumptions and perfecting his innovation. He believed in what he was developing, which led others to do the same. Through trial and error, Ford was able to develop something that fit his imagination about what the future of the automobile could be. And, to put this in perspective: the Model T was built by the Ford Motor Company starting in 1908. From 1913 to 1927, Ford factories produced more than 15 million Model Ts. Cool stuff.

What makes Ford an innovator, aside from creating the Model T, is that he made cars affordable. He took into consideration the life of an average American family. So while Ford did not invent the automobile or the assembly line (which he is sometimes mistakenly credited with), he did develop and manufacture the first automobile that many Americans could afford. Up until then, automobiles were priced out of reach (much like the first cell phones). It is Ford’s legacy that the car became a modern convenience that profoundly changed the twentieth century.

If Steve Jobs and the team at Apple invented an iPod or iPhone that was so expensive that no one could afford it, it would have been an invention that only an elite few could afford (as was the case with prototype mobile phones). Granted, cell phones vary in price, but their inventors figured out a way to mass market them.

Like Henry Ford’s automobiles, these technological inventions (small affordable cell phones) were in fact innovative because they added value in the marketplace to the lives of everyday people, just like in Henry Ford’s time. Neither cars or cell phones were immediately accessible to everyone, but the more people that tried them and endorsed their value, the more people wanted and purchased them and this drove down costs so more people could own them. This is what Ford envisioned. A car for everyone. A society (and quality of life) improved by automobiles. Ford’s statement below could have easily been spoken by Steve Jobs.

Part Two: What makes any one of us a Henry Ford 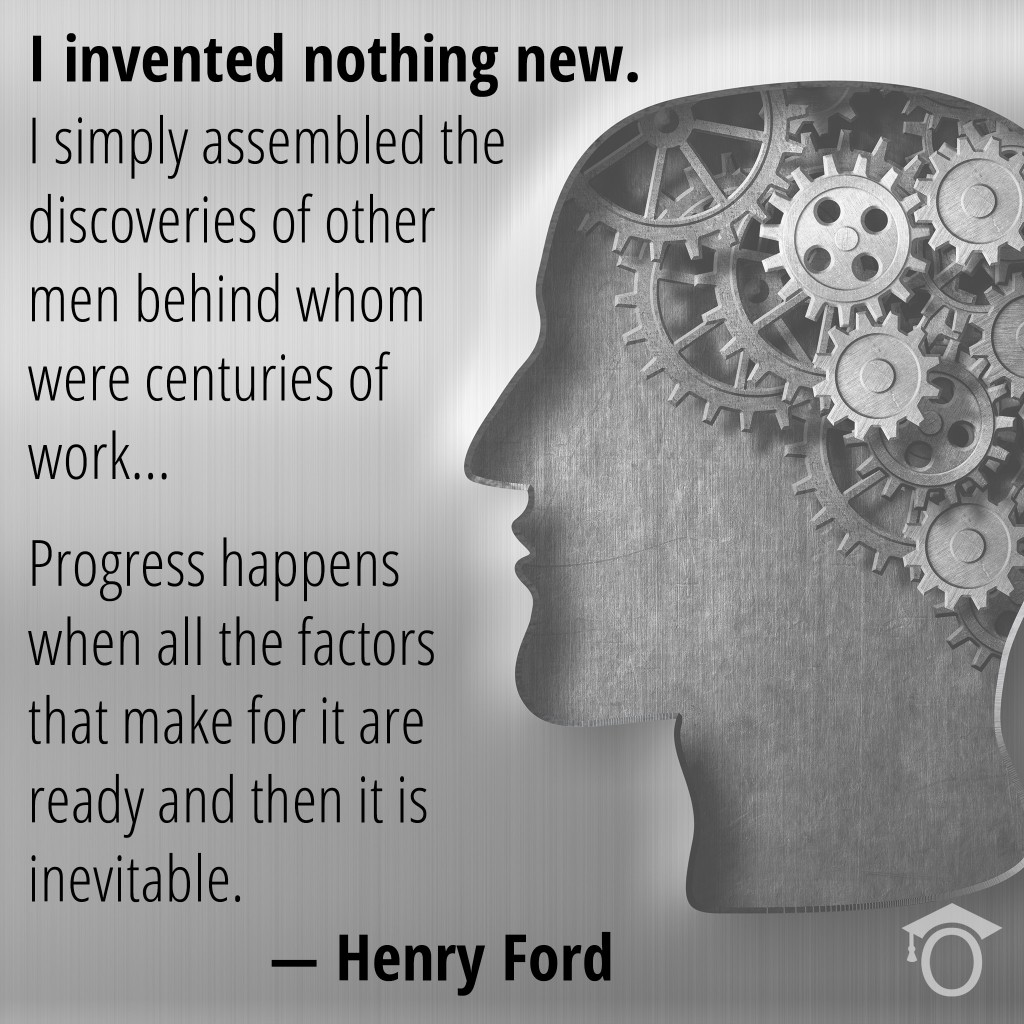 In today’s society, it is so easy to think that your ideas aren’t valued. With hundreds of social media platforms, sharing your ideas have never been so easy — but easily lost at the same time. Henry Ford’s story can speak to our generation in many ways. He shows us that adopting a new perspective can allow us to reach people in ways we never thought possible; and speaks to the importance of commitment, not giving up, testing assumptions, and learning from trial and error.

Writing 140 characters, three times a week isn’t enough to get your ideas out there. If you want your ideas to be heard you must take a risk, go to great lengths, and be willing to fail. Successful people will tell you that failure has been their teacher and motivator. If you haven’t already come to realize that the things we want most in life are usually never handed to us, you should start considering that now, because they are not. It is extremely hard to achieve anything in life by doing the bare minimum.

Most importantly, Henry Ford still teaches us to believe in ourselves, and to have confidence in our ideas. If you don’t believe in yourself or the work you are producing, why would anyone else? Be your own biggest fan, and be willing to push yourself, share your ideas and receive a lot of feedback.

Henry Ford made his ideas a reality almost 100 years ago with minimal resources. Now, in 2015, we have so many more resources to help us pursue our dreams. What I’m trying to say is that if he could do it a century ago, we can do it now.

Do whatever interests you. Fail a thousand times, and get up a thousand times plus one. Don’t stop believing in yourself, in your ideas, and in your dreams. With hard work, determination, and a vision, believe that YOU can change everyday lives. 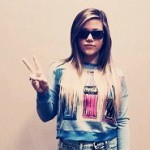 As Blogger and budget aficionado, Tara K. helps students across the country enhance their knowledge about money management and everyday  life. She is constantly looking for new ideas to transform into great advice for you. Pursuing a journalism major, Tara K. has a passion for the art of inquiry, which is conveyed through her writing.