How Do You Compare Colleges? 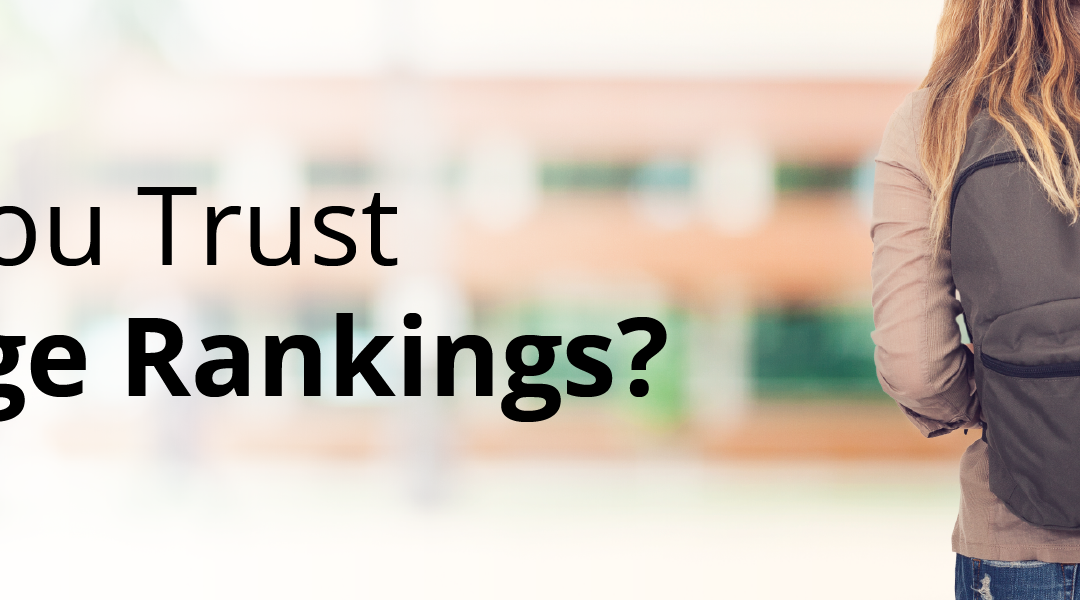 Forbes and Time Money recently released their college rankings lists for this year. Each publisher has a different methodology for deciding which schools to include and how they are ranked.

Both Forbes and Time Money filtered 5,000+ colleges in America down to around 700 by looking at only “public or private nonprofit colleges in the United States that enroll freshmen” with accessible data and minimum attendance rates.

Tuition Is Not the Sole Indicator for Affordability

Affordability is relative when you consider financial aid packages and salaries following graduation. Massive lists like these can frustrate college seekers since few students actually end up paying the “sticker price” for college tuition, and there’s a perception that some schools graduate higher wage earners. Schools such as Princeton, Massachusetts Institute of Technology, and Stanford have a reputation for successful alumni and are world renowned institutions that have perceptually high tuition. Contrary to the tuition price, schools such as Princeton are actually quite affordable for most students. 6 out of 10 Princeton families receive very generous grants and 80 percent of Princeton students graduate without any debt at all. (National average: <30 percent of students graduate  without debt.)

Unfortunately, most college seekers are not looking at Princeton.

Price alone can’t determine the best school in the country. Likewise, paying a high tuition and earning a high salary post-graduation might be worth the cost. There must be a consideration for return on investment. The Massachusetts Institute of Technology ranked #4 and #6 respectively has early career earnings around $81,000 and mid-career earnings over $150,000 (more than double the national average). However, so does Harvey Mud College and it ranked #23 and #132. Both STEM schools have similar costs (~$50K & ~$48K) and expected salaries, making the return on investment comparable. Yet Time Money and Forbes ranked Harvey Mudd College and MIT 109 places apart.

Forbes and Time Money’s lists have more than a few discrepancies. We compared Illinois colleges and found the two lists very different. For example, Forbes ranked Northwestern University #20 while Time Money ranked Northwestern University #86. There’s a significant difference being ranked among in the bottom top 20 colleges in the country versus the bottom of the top 100. Forbes profiled Northwestern as the elite Midwest school. Time Money claims the school doesn’t have name recognition outside of the Midwest and singled out Chicago winters as a downside. (That may explain why Time Money included 5 California schools within their top 10)

Considering that both Forbes and Time Money evaluate similar schools, their lists are strikingly different. They only have 3 schools in common on their top 10. While their methodologies appear scientific, the ultimate decision falls on the opinion of the editors. Granted, those editors’ opinions hold value and are based on their relative experience and knowledge, but considering that the college you attend can have a significant impact on the rest of your life you should be more diligent in your research.

How to Research Colleges with Diligence

We don’t recommend choosing a college based on these sorts of lists. However, those college rankings are helpful as a way to fact check what you already know about your school. Research tools such as IonMatch or U.S. News and World Report’s College Compass can narrow down your search significantly based on your ACT/SAT test scores, GPA, location, financial limits, etc. Once you have a realistic idea of what you want to go to college for and which colleges are likely to accept you, you can start to look into each college more in-depth.

After narrowing down realistic schools in your field, the best way to choose between colleges is to visit them in person. You’ll get a sense for the culture, campus life, and talk to real students. Ask those students what they like about their school, what majors are the most popular, what the campus life is like to see if you’re a good fit.

The college you attend doesn’t need to have worldwide name recognition to start a successful career (See: Do Degree Holders from Prestigious Colleges Have Higher Incomes?). As long as the school you attend has a reputation for quality training within your chosen field, you’ll have a high probability of success. Keep in mind that different schools offer different programs. If your dream is to study 19th century French poetry, MIT probably isn’t the best school for you. Therefore, going off of a national ranking, even looking only at liberal arts schools, won’t give you much insight.

Parents start planning and saving for their children’s college education early, sometimes even before they’re born. Business can help their employees even more by giving them a college planning tool that reassures them the colleges are a good investment. An IonTuition subscription includes IonMatch, a college research tool that filters schools based on a wide variety of factors. If you are going to major in a Foreign Language and Literature, IonMatch’s data presents the cost and time to complete that program at schools you can afford, as well as providing real world income and salary figures from students who graduated with the same major.